Hi there! Last week I covered fabric tips that included what to do before you went to the quilt shop, while you were there and after you came home. We talked about making test blocks, how to pre-wash fabric and even how to square up your fabric. If you missed that post, find it here. This week, I want to cover some things you should know about fabric and also move into some tips on strip piecing. Let’s get started!

It’s a good idea to know what these terms mean because you may have a quilt pattern that requires you to cut fabric on the lengthwise grain or crosswise grain or the pattern may require you to cut strips on the bias. Also having this knowledge will also help you understand how the fabric will behave when you are piecing units and blocks.

The crosswise grain (weft) is perpendicular to the selvages (where my finger is pointing). It is a little less stable than the lengthwise grain.

On the bias, the fabric is the least stable and has the most stretch to it. That’s why binding cut on the bias is used for quilt tops with scalloped edges or for a circular quilt. Also, any seam sewn on the bias (like in half-square triangle squares) must be handled with care when pressing or ripping out a seam so the fabric is not stretched out of shape. Once fabric is stretched on the bias, it usually stays distorted. The photo below shows the stretch.

You’ve heard me talk about quilting with strips or strip quilting. I collect 1 1/2″ and 2 1/2″ strips in all color prints and also in tan prints. Since I have them on hand, I can quickly pull out strips, stitch them together and make a lot of different blocks.

Making strip sets is the first step in strip quilting. Strip sets are made from joining two or more long strips on their lengthwise sides. You can use width of fabric strips (40-44″ long), strips from fats that are 20-22″ long or any length of strips you have in your stash. It’s easier for your strip sets to distort if you are using longer strips so I like to use shorter strips.

Here’s some tips on joining strips:

Tip#1: Lay your strips right sides together and pin in a few places.

Like I’ve said in other posts, pinning is essential. It guarantees that the raw edges of each strip stay matched up throughout the stitching process.

Tip #2: When stitching the strips, do not pull on them or push them as you are joining them with the 1/4″ seam.

Just lightly guide them making sure you are stitching with an accurate 1/4″ seam. If you push or pull the strips through you can shift the top strip from evenly feeding.

Tip #3: Press the strip set open. Whether you do open seams or press them to one side, make sure you are pressing and not ironing. If you iron over the seam, you can distort it. If you want to review pressing vs. ironing, my mini tutorial video can be found in this blog post from a few weeks ago.

Once the strip set is pressed, you’re ready to sub-cut it into the pieces you need (we’ll talk about that later).

Tip #4: Not all strip sets for blocks are made up of only 2 two strips. To add to a two strip set, start the next strip on the end where you stopped stitching the first two together. So you are beginning your stitching on opposite ends for each strip you add to the strip set. If you join all the strips starting at the same end, that can lead to strip set distortion.

To be safe, after adding each additional strip to a strip set, finger press open and measure to be sure your seams are accurate and the size of the strip set measures correctly.

What Can You Make with Strip Sets?

Strip sets makes some blocks easier by consolidating some of the sewing. For example, if you are making a nine patch block, instead of piecing nine separate squares together, you can make strip sets, sub-cut and then stitch three units together.

First, you need to sub-cut your strip sets. Sub-cutting just means cutting units from a strip set. Then you join units from the different strip sets to make your block.

Here are the two types of strip sets needed to make nine patch units and how many pieces to cut to make a nine patch block:

Making borders is another use for strip sets. Here are a few quilt borders I have made that use strip sets.

For the quilt on the left, I just made several strip sets of a color print and a tan print. Then I sub-cut them and made several four patch blocks that were then joined into rows. For the center quilt, I just made several two color strip sets and then sub-cut those into 4 1/2″ long segments. Joining them together makes a pretty piano key border. For the last quilt, I made what I call a modified piano key. By adding a stitch and flip tan print corner to opposite side of two strip pieced units and then joining those units, I made a “saw-tooth” piano key border.

So, that’s all I have for this week. Share your thoughts on strip piecing and blocks made from them to be entered into this week’s drawing for my pattern, Sister’s Reunion. 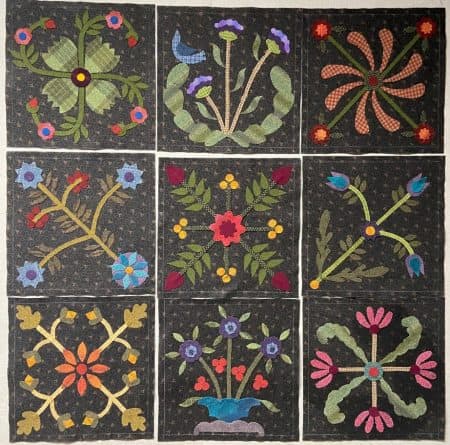