The last few weeks, we’ve talked about cleaning your machine, using the right needles, caring for your cutting mat and building a fabric stash. So, this week I thought I would throw in some tips on fabric and threads and various other tips that will make your quilting experience fun and more relaxing. Let’s get started!

The common belief is that fabric has a width of 44″. But, you can not depend on all of that as usable. One reason is the selvage of the fabric.

Selvage is the tightly woven, finished edges of fabric on the lengthwise grain. This prevents the woven fabric from fraying or unraveling. The selvages are cut off before you cut from your piece of fabric. For that reason, the actual usable fabric width is between those selvages. You can also lose width from pre-washing the fabric if that’s something you do. For those reasons most patterns, mine included, assume 40″ of usable width. So, here’s a few tips:

Tip #1: Don’t assume the pattern writer of the pattern you want to make assumes 40″ width of fabric unless it’s stated on the pattern. If I do not know the width assumed, I will purchase about 1/8 yard extra than noted on the pattern. This also allows for width lost when squaring the fabric up, pre-washing it or for cutting errors … we all make them!

Tip #2: Cut largest to smallest pieces from a piece of fabric. My patterns list all the cutting instructions up front and go from the largest piece to the smallest.

Not all patterns are written this way. So, it’s a good idea to read the whole pattern through, front to back, before you start cutting. That way you can be sure not to run out of fabric.

Tip #3: It’s a good idea to understand the grain of the fabric and bias so you know how a fabric will behave in a unit or block you are creating. It’s also important to know this because some patterns will tell you to cut certain pieces on the lengthwise or crosswise grain. Here’s a brief run down:

The crosswise grain (weft) is perpendicular to the selvages. It is a little less stable than the lengthwise grain.

On the bias,  the fabric is the least stable and has the most stretch to it. That’s why binding cut on the bias is used for quilt tops with scalloped edges or for a circular quilt. Also, any seam sewn on the bias (like in half-square triangle squares) must be handled with care when pressing or ripping out a seam so the fabric is not stretched out of shape. Once fabric is stretched on the bias, it usually stays distorted.

See how stretchy it is on the bias?

Tip #1: Remember last week’s post about cleaning your machine of lint? That lint comes from the fabric, batting and thread you choose to use. Let’s focus on thread. The higher the quality thread, the less lint will be created. It’s that old adage “you get what you pay for”. I like Auriful 100% cotton 50wt thread.

I have found this thread has created the least amount of lint compared to other threads I have used. Aurifil is a high quality cotton thread that is manufactured in a way that makes it less lint producing.

Tip #2: I like to keep an array of neutral threads so I can match the shade to the fabric I’m piecing.

This way, if any stitches are visible in the seams, they won’t show as much if the shade is closely matched to your fabric. You wouldn’t want to use a black thread when piecing light fabrics together or white thread when piecing dark or black pieces of fabric together.

Tip #3: Believe it or not, if your needle is old, it can damage your thread. It can help to create more lint, fray the thread or even break it. So, make sure to have a fresh needle for each project. Needles are not expensive, so keep a good supply on hand.

Tip #4:  Did you know the way the thread is wound onto the spool determines how you should use it on your machine? Most sewing machines these days come with horizontal and vertical spool holders. Certain types of spools are meant to be used on one or the other.  Using the spool on the correct holder allows the thread to unwind as it should.

Cross-wound thread looks like below and should be used on a horizontal spool holder:

This allows the thread to unspool from over the top of the spool pin to keep it unspooling smoothly.

Horizontally wound thread looks like below and is meant to be used on the spool pin vertically.

They can be used on a horizontal spool pin but they perform best on a vertical spool holder so the thread unwinds at a 45 degree angle. This keeps the thread from getting caught in the space between the thread and spool causing tension problems.

So, that’s it for this week. Leave a comment or ask a question below and I will choose someone to win a spool of Aurifil and my pattern, Twinkle Twinkle.

The drawing will be on Monday, February 8th. ***We have a winner! Congrats, Jackie Brooks!*** 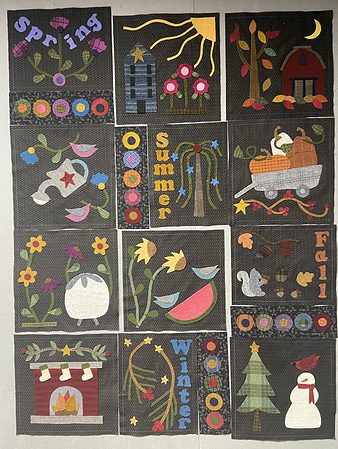